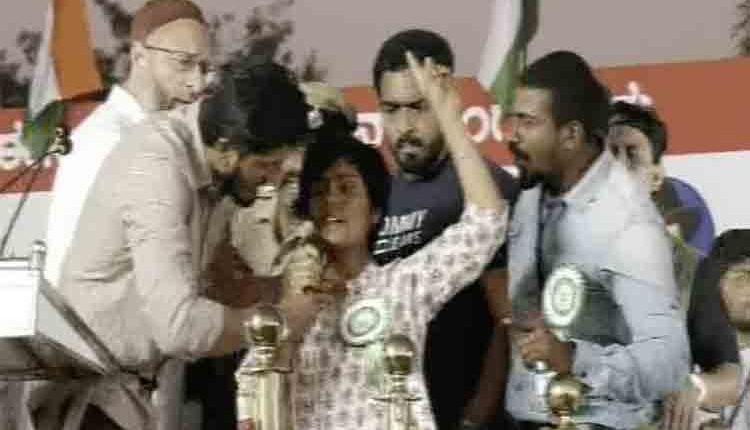 The chaos in the city of Bengaluru against the Citizenship Amendment Act (CAA) has caused serious confusion. MIM President, Hyderabad MP Asaduddin Owaisi is delivering his speech. All the attendees, including the elders on the stage, felt the shock at once. Asaduddin Owaisi came back and pulled the mic. The young woman was chanting the same slogan.

The organizers of the House also rushed to the young woman and prevented her from making further slogans. Even after they pulled mike up, the young woman shouted slogans well. After that she shouted Hindustan Zindabad and tried to tell some thing. The police then detained her while she was trying to say something.

The young woman was the cause of the tumult on the stage. Her name is Amulya or amoolya. She belongs to Bangalore. She is in custody of the police. Asaduddin Owaisi expressed deep embarrassment for her slogans about cousin country Zindabad. He refused her to make derogatory remarks about the country. The cameras captured scenes of outrage over the young woman when she was on stage. He has reported to have expressed his embarrassment to the organizers, saying, “If this were to happen, I would not have come to this meeting.”

Asaduddin owaisi has condemned the incident.

Asaduddin Owaisi has strongly condemned the incident. ‘She is someone who is unrelated. Even the organizers of the show said they have not invited her. We will always be for India. We will never support Pakistan, ”he said.

The police have registered a case under IPC Section 124. They expect the woman to appear before the judge after she underwent interrogation. As the police took her into custody .. Everybody were shouting loudly slogans against her. However, we need to check the video clippings in detail why she was creating all this chaos.