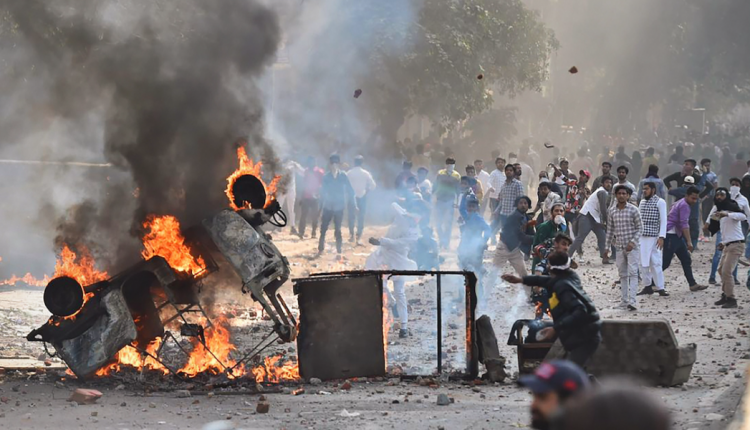 Delhi burning on : The violence began shortly after BJP leader Kapil Mishra gave the police an “ultimatum”. This was to clear up the anti-CAA sitting protests, whereupon pro-CAA groups gathered.

New Delhi: When clashes between supporters and opponents of the Citizenship (Amendment) Act (CAA) continued in parts of northeastern Delhi on Monday. The Delhi police announced that a police chief had died in the violence in Maujpur. Dept has identified the policeman as Ratan Lal, who worked in Gokalpur, the area where violence . Lal was reportedly hit on the head with stones. Police took him to a hospital where he succumbed to his injuries.

The violence that engulfed the capital also claimed the life of civilian Mohammad Furqan, reports have confirmed.

Deputy police commissioner Shahdara, Amit Sharma has suffered with head and hand injuries. He was in hospital and was out of danger, PTI reported.

The violence continued the second day after BJP chief Kapil Mishra issued an ultimatum to the Delhi police on Sunday. This was to clear the protest sites within three days. On Monday, after the cop’s death, Mishra – who had made an open call to violence. He tweeted that “violence is not the way to find a solution.”

Although not confirmed, a screenshot from a video of the violence allegedly shows a man pointing a gun at a police officer.

Congress Secretary General Priyanka Gandhi Vadra said Monday that only the common man and the nation suffered with violence. She also appealed to peace.

BJP spokesman Meenakshi Lekhi said Monday that the death of a police chief in Delhi which became violent over the amended citizenship law was a “trick” to embarrass India.

In Chandbagh, Shahdaab, who is participating in the anti-CAA protests, claimed that around 10:20 am. “RSS people came with the police and filed a Lathi charge at the protest site.”

He estimated that there were about 150 women in the main protest enclosure, along with 200 men. The Lathi charge continued over half an hour, with both members of the Pro-CAA group and the police indiscriminately violating demonstrators, including women. At least one woman had a head injury, he said.

Delhi CM Arvind Kejriwal expresses his concerns about the situation.

The Chief Minister of Delhi, Arvind Kejriwal, took note of the violence and called on Vice Governor Anil Baijal and Interior Minister Amit Shah to “restore law and order in the region”. he expressed his concerns about Delhi burning violence turmoil.

On Sunday, BJP leader and former MLA Kapil Mishra differed in. He said Police has to clear those who protested the CAA in the Maujpur and Chandbagh areas of northeast Delhi with violence. If the police did not clear the area. Hours after its rally, groups clashed and supported the controversial law on Sunday evening.

According to the PTI news agency, the two groups threw stones at each other. The police fired tear gas cartridges to control the situation.

Mishra was among the many BJP leaders who used brand slogans during the Delhi election campaign. He had held a rally near Jaffrabad . Kapil gave the Delhi police a “three-day ultimatum” to end the seat demonstration in to clarify near the subway station. He threatened that if the demonstrators were not removed, he and his followers would not “listen to the police.”

“We will leave the area peacefully until the US President is in India. After that, we will no longer listen to you (the police) if the streets are not cleared by then, ”he told the assembly.

According to the Indian Express, the BJP leader and his supporters gathered near the Maujpur-Babarpur subway station. This is about 2 km from the anti-CAA protest in Jaffrabad. More than 200 people gathered on site. In addition to slogans such as “Bharat Mata Ki Jai” and “Jai Shri Ram”. They played song “Shoot the traitor”, the newspaper reported.

Locals express that the violence started almost immediately after the former MLA’s departure around 4:30 p.m. “… a group of people running from the side of Jaffrabad to Babarpur. When rock falls broke out from both sides, more locals gathered and violence spread to the interior of Babarpur. Police fired Tear gas cartridges to disperse the crowd, which has increased to over 500, ”the report said.

The newspaper reported that parts of the boundary walls were broken to use the stones for throwing. Delhi police have been seen throwing stones along with CAA supporters, the newspaper said, adding that the police have refused to answer questions about the allegation.

There was a pause at around 5.40 p.m., which started 10 minutes later under the Maujpur-Babarpur subway station. At around 6:30 p.m. the situation was finally brought under control.

The Police have close the entrance and exit gates of Jaffrabad and Maujpur-Babarpur for security reasons.