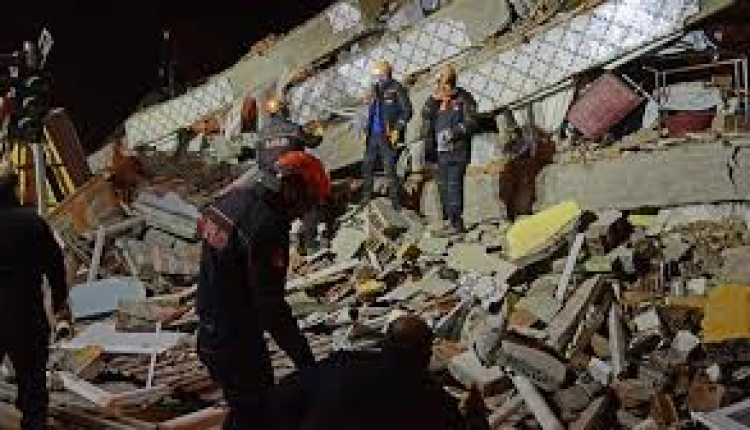 Several dead after a massive earthquake in eastern Turkey. Officials confirm that 20 people have been killed as rescue teams work to release prisoner survivors

Over 500 have been injured and some are trapped in the rubble of fallen buildings. Rescue teams from neighboring provinces were dispatched to the affected areas, where they worked with headlights in the dark. Defense Minister Hulusi Akar said the troops are on standby to help.

The television showed how rescuers took an injured person out of the ruins of a collapsed building in the eastern province of Elâzığ. It was believed that at least three people were trapped in a building in the area where four or five buildings were officially toppled, including one with at least four floors.

“It was very scary, furniture fell on us. We ran outside, ”47-year-old Melahat Can, who lives in the provincial capital Elazig, told Agence France-Presse.

Sixteen people were killed in Elazig and four others in the neighboring province of Malatya, the Turkish disaster and civil protection authority (AFAD) said early Saturday. Around 920 injured were in hospitals in the region, it said.

The Turkish President, Recep Tayyip Erdoğan, said on Twitter that all measures were being taken to “ensure that the Elâzığ earthquake, which was felt in many provinces, was overcome with the least losses”.

He said the Home Affairs, Health and Environment ministers had been sent to the affected region.

Elâzığ is located about 750 km east of the capital Ankara.

According to Environment Minister Murat Kurum, 30 buildings collapsed in both provinces after the quake. People were taken to a dormitory and a sports center in freezing temperatures.

Elâzığ Governor Çetin Oktay Kaldırım told NTV Turkish that a fire had broken out in a building in Sivrice near the epicenter, but was quickly brought under control.

Home Secretary Süleyman Soylu was at an earthquake prevention meeting when the quake broke out.

The Kandilli Seismology Center in Istanbul said the quake was 6.5, while the US geological survey reported the preliminary magnitude 6.7. The quake affected not only Turkey, but also Syria, Georgia and Armenia. Different earthquake monitoring centers often give different estimates.

In 1999, around 18,000 people were killed in two major earthquakes in northwestern Turkey. A 2010 magnitude 6 earthquake killed 51 people in Elaziğ.