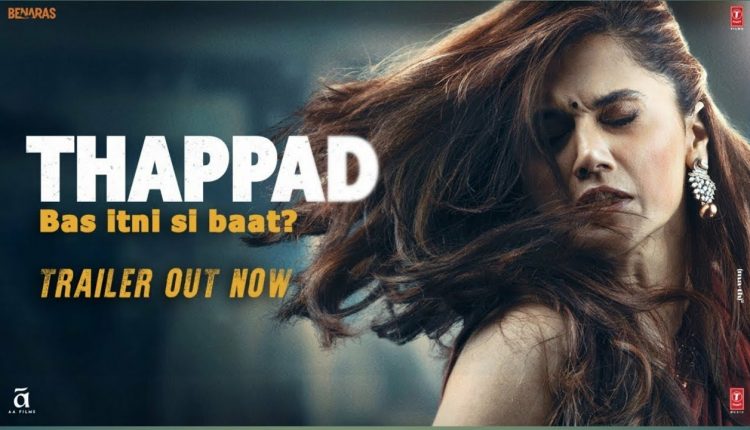 New Delhi: Taapsee Pannu shared the first look poster of his new movie Thappad. She dropped the trailer on Friday. We know Taapsee Pannu better for leading films on social issues. She has been chosen on Thappad as a happy and lucky married woman, who undergoes a massive transformation after a humiliating incident. The name of the movie Thappad suggests what exactly marks a turning point in the previously peaceful marriage of Taapsee. The trailer shows that Pavail Gulati, who plays the role of Taapsee’s husband, loses his temper. He is in an argument with colleagues in the office. He hits Taapsee in an attack of anger at a house party. Meanwhile, Taapsee shared the trailer with these words: “Haan bas ek thappad … par nahi maar sakta (Yes, it’s just a slap … but it can’t hit you!”).

The trailer begins with Taapsee’s lawyer notifying him of a legal notice. He received asking him to resume his married life with his husband. To understand why exactly Taapsee lives separately from her husband, the lawyer asks Taapsee if any of them have an affair or if they have problems with their in-laws. Taapsee explains the situation. The lawyer looks at Taapsee with his eyebrows furrowed and says: “Then, it’s just a slap.”

The Thappad trailer also incorporates glimpses of Taapsee’s happily married life to offer a strong contrast to her life as a woman fighting for justice. Taapsee remains firm in the midst of her husband’s apologies. The requests to withdraw her legal complaint and the prejudiced advice of her relatives and that is what makes the trailer worth watching. The transformation of Taapsee Pannu from a lively housewife to a woman determined not to let the thappad incident happen with the attire of forgiveness is remarkable.

Watch the trailer of Thappad here: