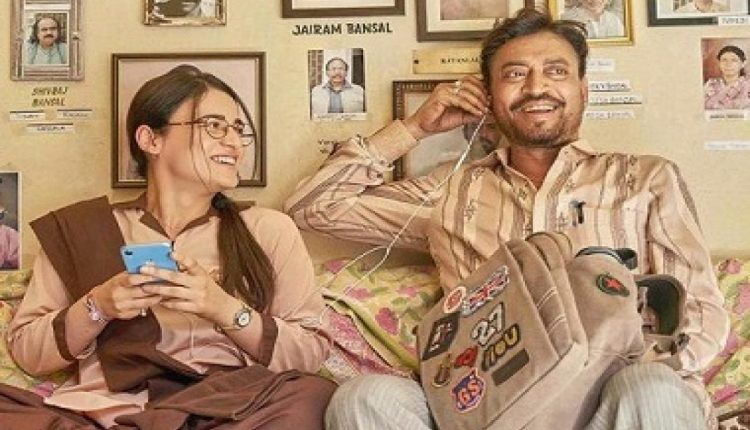 The story of the movie is mainly about love and affection between a father and his daughter. The story revolves round Champak (Irrfan Khan) and his daughter Tarika (radhika madan). The movie takes us to Udaipur, Rajasthan. India Today magazine reported that the actors made us laugh at some times. Some times they made us cry also. Tarika’s dream in the movie is to just go abroad for higher studies. The director spent most of the first half in just introduction of characters to us.

The film touched too many points and went into many directions. It lost the main line at few occasions. Some times misunderstandings crop between father and daughter. The daughter is forced to sacrifice her dreams for the sake of her father who stays single.

The angrezi medium movie collected approximately 9.5 crores in first 4 days. Unfortunately the Coronavirus disaster caused a damage to collections. The movie could mint only just 35 lakh rupees on its first sunday. Now the country is in lock down mode. All the theaters in India are not show casing any movies now. The movie will stream online on Jio Cinema in future.

Deepak Dobriyal did well in the movie. He proved himself to be a surprise pack. When ever he appeared on screen we burst into laughter. He played the brother role of Champa. His chemistry with his brother Champa is rocking in the movie. Radhika Madan showed her caliber in the movie. She has shown all shades in her character. She has win our hearts with some times being innocent and some time rebellious.

In addition, there are times when the film falls prey to stereotypes and does not offer us anything that we have not seen. For example, an airport scene where an Indian man is worried about the achaar flask he is traveling with, a girl from a small town is distracted once she is in a foreign land, a friend always arrives with help in the penultimate hour of need, and a man setting aside rivalry for his beloved niece.

Kareena Kapoor Khan makes the most of her role as Naina Kohli, a police officer, and Dimple Kapadia offers an excellent performance as her mother, Mrs. Kohli. Pankaj Tripathi and Kiku Sharda also make us laugh with their outlandish acts and Ranvir Shorey makes their presence felt despite the small role. The background music is excellent and the songs raise the emotion of the film. However, we wish that character arcs are better written.

In conclusion, we can call this movie as both family drama and comedy dram. Once you connect to this movie to full extent you feel like giving a hug to your parents once you reach home. Most of the critics gave a rating around 3.5 out of full five. The emotion in the story did not allow to deliver too much humor. But the director did well to pack some laughs so that we do not feel too bored.