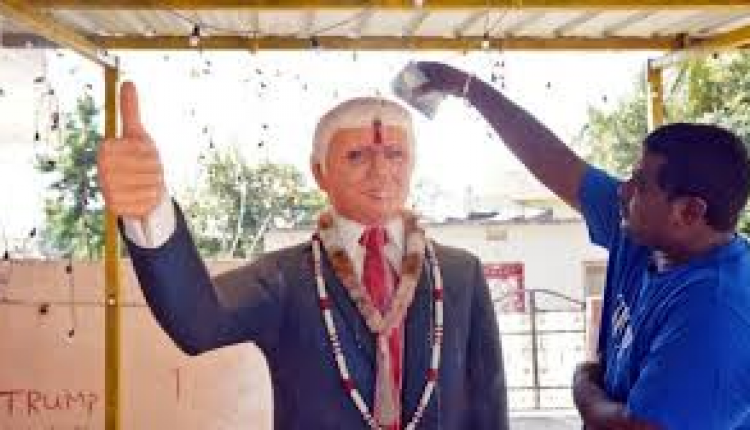 US President Donald Trump is coming to India on February 24. We don’t know how much Modi is looking forward to the Trump visit but .. ..the Telangana Trump devotee is looking forward to seeing his God. Bussa Krishna belongs to a village in the Bacchanapetta constituency of Janagama district. He is building a temple for donald Trump. He is worshiping a six foot tall statue.

As the US President is coming to India, He wants to meet his hero. He wants an opportunity to meet his worship deity. ” India-US relations want to be strong. B.Krishna is fasting every Friday for the longevity. Do you want to tamper with the photo of Trump before starting any work? I want the government to fulfill my dream, ”the Trump devotee said.

He’s so mad at Trump that he cuts his finger off .. He bleeds in with that blood. Trump’s photo is also on his phone pouch. T-shirts also have the name Trump. Trump may not even be in his own country.

The news of Trump’s devotion on social media and media has gone viral. Bussa Krishna has said in the past that the US President Twitter has said that he will meet him soon. And whether he(Donald trump) now gives his devotee a part of the vision?