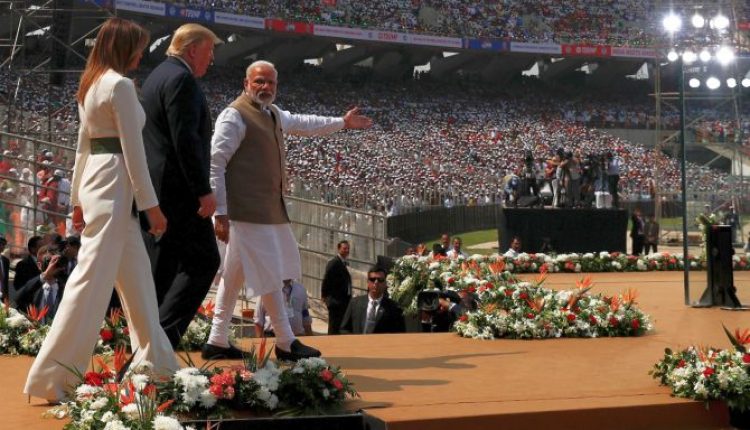 Namasthe Trump in Motera Stadium : US President Trump has called for an end of terrorism in the world. he said there is no more Terrorist organization ISIS . Terrorism is a global problem, and India and the US are working together to end this crisis, he said. He said that terrorism has become increasingly common in countries. Baghdad and Syria have taken several steps to eradicate it. He addressed a large gathering in Ahmedabad at the largest Motera stadium. Trump did along with Prime Minister Modi on Monday, he said India and the US are cooperating in defense.

He praised Modi and said he had started his career as a chai wala and reached the prime ministerial level. Trump has claimed that his long-time friend, Modi, will always have a stable place in his heart. He said that under Modi’s leadership, India has made great strides in developing friendships. He quoted friendships between the people of both countries. Trump has commented that more than 60 billion voters have left an indelible impression on Modi.

Trump has said that Sachin Tendulkar and Virat Kohli are Indians whom he knew. India has produced some of the best players in international cricket. The country has provided such great cricketers. This country is a democratic, peaceful country .. It is a pleasure to see 1.20 lakh people in one place. He reminded Swami Vivekananda on this occasion. “It is a $ 3 billion cost of defense contract,” he said. “We are ready to deliver the most sophisticated and terrifying equipment on the planet to India. Last year we welcomed your Prime Minister in our country at the biggest football stadium in Texas. India today welcomed me at the world’s largest cricket stadium.

Us president attented with his family.