Rajinikanth says “Sorry, I will not apologize:” about claim on Periyar. 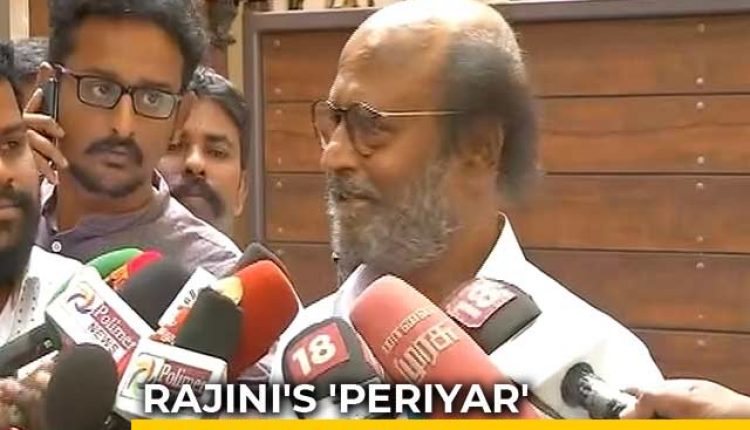 Sorry, I will not apologize: Rajinikanth. Protests against his claim on Periyar.

HIGHLIGHTS in the Super star Rajini – claim on periyar controversy.

Rajinikanth refused to apologize to the demonstrators for commenting on Periyar
A pro-Tamil group has planned to protest and besiege his house
Rajini had said that Periyar removed the pictures of Sita and Lord Sri Ramachandramoorthy at a rally in 1971.

When asked about DK leaders who disproved his claims, Rajinikanth said: “It was not (an incident) to be disputed but to be forgotten …” The DK party asked the actor to either apologize or make copies of the 1971 Thuglak magazine for confirmation of its claims.

Tamil actor Rajinikanth removed the photocopy of a magazine page and declined on Tuesday to apologize for his comments on a rally that social reformist Periyar had held decades ago. Rajinikanth was accused of “defaming” Periyar and said his comments were based on news reports that he had read.

On January 14, on the occasion of the 50th anniversary of the Tamil magazine Thuglak, Rajinikanth claimed that Periyar held a rally in Salem in 1971, “showing the depictions of Ram and Sita without clothes and with a wreath of footwear.” According to his statements The Dravidar Viduthalai Kazhagam (DVK) party filed six police complaints against the actor accusing him of being defamed, and the Dalit VCK party also announced protests outside Rajinikanth’s house.

Rajinikanth spoke to the media outside his residence in Poes Garden on Tuesday morning, showing newspaper clippings to support his claim. “This is Outlook, Hindu group … This report from 1971 says that portraits without clothes were shown. This is something I’ve read. I can’t apologize for that. Let me tell you politely that I can’t apologize, sorry, ”he said, adding that a Lakshmana who had participated in a Dharna organized against the rally also clarified this.

Rajinikanth’s explanation came after DK party leaders, including Kolathur Mani, who himself attended the rally in 1971, found that the representations of Hindu gods were not shown without clothes at the rally.

When asked about DK leaders who disproved his claims, Rajinikanth said: “It was not (an incident) to be denied, but to be forgotten …”

Rajinikanth referred to the 1971 rally to glorify the late Cho, who published the Thuglak magazine, and to claim that Cho protested the rally and published articles in the magazine. Rajinikanth said the magazine was banned by the then M Karunanidhi government, and this forced Cho to reprint it, which created a lot of demand on the black market.

In response to Rajinikanth’s attempt to justify his testimony, Mani said the actor should either apologize or provide copies of 1971 Thuglak magazine to support his claims. “If he has that basic integrity, he should have brought the original Thuglak from 1971. He is close to the Thuglak team and it will be easy for him to get a copy.” Instead, the photocopy of another magazine is raised to justify his factually false statement to defame Periyar and the movement he led in Tamil Nadu, ”said Mani. He added that Rajinikanth may be reluctant to apologize for his misstatement, as is the case with many BJP leaders. “But if he thinks he deserves a little bit of credibility among people, he should present this original from Thuglak,” said Mani.

A day after Rajinikanth’s speech, which sparked controversy, a source near Rajinikanth told a popular news magazine that the actor originally did not expect controversy for what he had said. “He didn’t have to make fun of one (Periyar) to glorify another (Cho). He is usually careful about lending ideas for a public speech. He was pressured to make political statements at the event. But he refused to do that. He attended the event for his gratitude to Cho. “