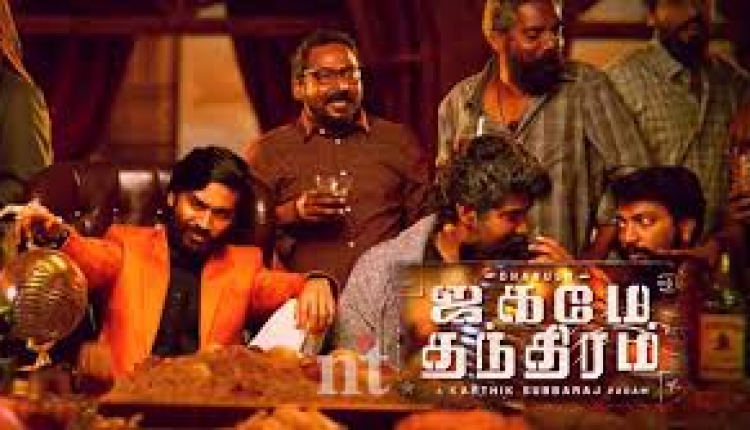 Jagme Thandhiram first look : The title of the Dhanush and Karthik Subbaraj’s movie is Jagame Thandhiram. We and fans expect the film will release worldwide on May 1, 2020.

Dhanush’s film and filmmaker Karthik Subbaraj, provisionally titled D40, is currently in the post-production stage. Y Not Studios jointly producing this film, to hit theaters on May 1. The creators have launched the social media movement poster today (February 19).

Want to see the first look as romi devi in 83 movie you can find it here in this blog.

The Asuran actor went to Twitter to launch the motion poster along with the title and release date. The creators reveal that the title of the movie is Jagame Thandhiram. The motion poster, which lasts one minute and twenty seconds, looks elegant.

Jagame Thandhiram’s motion poster features the main characters played by Dhanush, Game of Thrones actor James Cosmo, Kalaiyarasan and others. We see sparkles of biriyani, pizza, eggs and liquor on the table. Dhanush is presented with an AK 47 in the back and two guns in each hand.

The motion poster works mainly on the intriguing music of Santhosh Narayanan. Looking at the first glance, Jagame Thandhiram looks like a solid gangster movie that has black comedy tones. While everyone else wears elegant clothes, we can see Dhanush wearing a veshti (dhoti) and a shirt.

Jagame Thandhiram will hit theatres worldwide on May 1. The film is as out and out action thriller that takes place in London. Dhanush, in a tweet, said: “It was a pleasure working with a filmmaker as peculiar, sensitive and visionary as @karthiksubbaraj, this is going to be special (sic).” The film also features Aishwarya Lekshmi, Joju George and others in important roles. Photography director Shreyas Krishna and composer Santosh Narayanan form the technical team. Jagme Thandhiram first look updates keep coming here.. stay tuned.