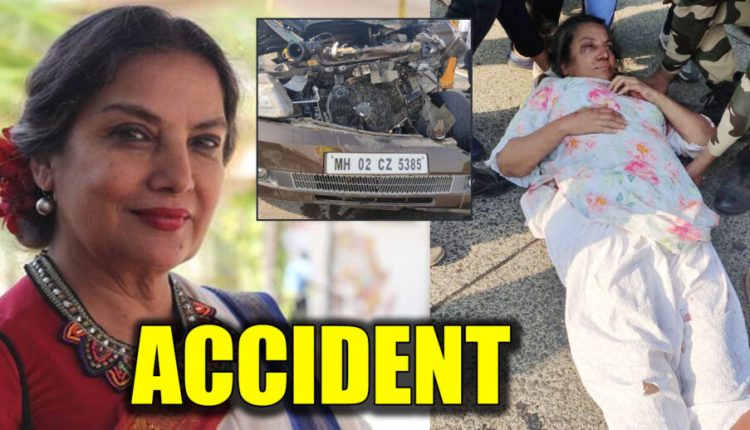 Shabana Azmi was engaged to Benjamin Gilani in the late 1970s, but the engagement was canceled. [She later married Javed Akhtar, a poet, poet, and Bollywood screenwriter on December 9, 1984, becoming a member of the Akhtar-Azmi family of films. It was Akhtar’s second marriage, the first to Bollywood screenwriter Honey Irani. Shabana’s parents, however, objected to being associated with a married man with two children (Farhan Akhtar and Zoya Akhtar). Indian actresses Farah Naaz and Tabu are her nieces and Tanvi Azmi is her sister-in-law.

According to the report, She was also in the car with husband Javed Akhtar. However, he has not suffered any injuries. At the same time, the driver of She was also hurt. The accident occurred when he was traveling from Pune to Mumbai. His car collided with a truck-

The accident occurred around 4 pm on Saturday evening near Khalapur, 60 km from Mumbai. Raigarh SP Anil Paraskar says that his car collided with the truck. The car has been badly damaged in this accident.

Shabana Azmi was returning to Mumbai when her car collided with a truck. According to the Maharashtra Traffic Police, the incident took place around four o’clock in the evening, two kilometers before the Khalapur toll booth. According to police, Shabana suffered injuries near her face, neck and eyes. She was sitting on the seat next to the driver.

Police say Javed Akhtar was in another car from behind and his car was not involved in this collision. Inspector Vishwajit Kainejade of Khalapur Police Station from Hindustan Times has said, “Shabana’s Safari car was driven by her driver and Javed Akhtar’s Audi car from behind. The driver was trying to overtake and in the meantime, a truck collided with the rear of the truck.