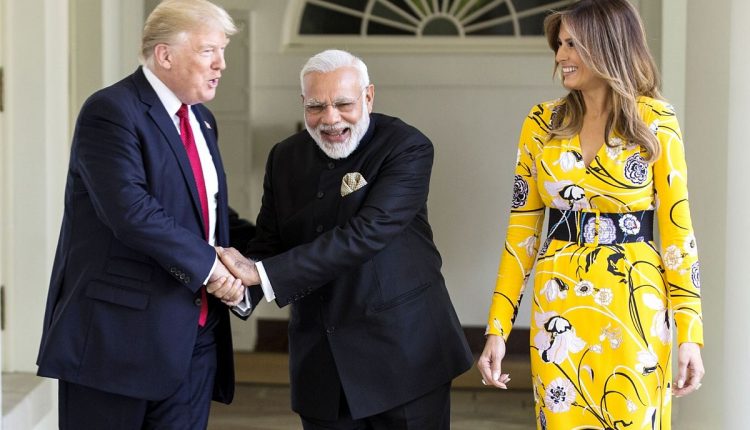 US President Trump couple has arrived in India. Prime Minister Narendra Modi greeted has recieved Trump couple. The tour is Almost a two-day tour in India. Donald Trump India Visit: US President Trump Visits India. Prime Minister Narendra Modi greeted Trump couple with great wishes. Trump is expected to tour India in nearly two days. First he will visit the Sabarmati Ashram. From there, they will participate in a 22 km road show rally to the Motera Stadium. The rally will continue for about 35 minutes. Officials arranged dancing with hoardings, placards and stage to welcome the rally throughout. Namasthe Trump in Motera stadium live updates…

The Namaste Trump event begins shortly after the stadium’s opening at 12.30pm. There, the President of the United States is likely to speak to the public. They reach Agra at 4.45 pm and visit the Taj Mahal. From there, they will leave at 6.45 pm. Arrive at the Delhi Palam Airport at 7.30 pm and arrive at the Hotel ITC Maurya in Delhi at 8 pm.

US President Donald Trump & Melania will arrive at Rashtrapati Bhavan at 9.55 am the next day. At 10.45 pm they pay tribute to Gandhi’s tomb at Rajghat. They will then reach Hyderabad House at 11.25 am. Melania Trump will visit public schools in Delhi. The bilateral meeting will be held later. Modi-Trump are likely to hold a joint press meet. After the meeting, there will be a lunch program offered by PM Modi.

Biography details and wiki about donald trump junior on this blog too. we can read it.

Donald Trump will go to the US Embassy at 2.55pm after lunch. He will stay with Embassy staff until 4 pm. He will return to the Hotel Maurya at 5 pm. At 7.25pm ​​Trump-Melania will meet President Kovind at Rashtrapati Bhavan. At 8pm, there will be a dinner program. President of India will arrange this to the president of US the Trump couple. The Trump team will travel to the US at 10 pm. This ends the Trump couple’s visit to India.

Ivanka Trump daughter of US President is the highlight.

Trump family flew directly from the airport to the Sabarmati Ashram. Ivanka soon after arriving in India, said that she was happy to return to the country after two years. She added that the alliance between the two largest democracies in the world hopes to further strengthen the occasion. In 2017, she was attending a Global Summit in Hyderabad.