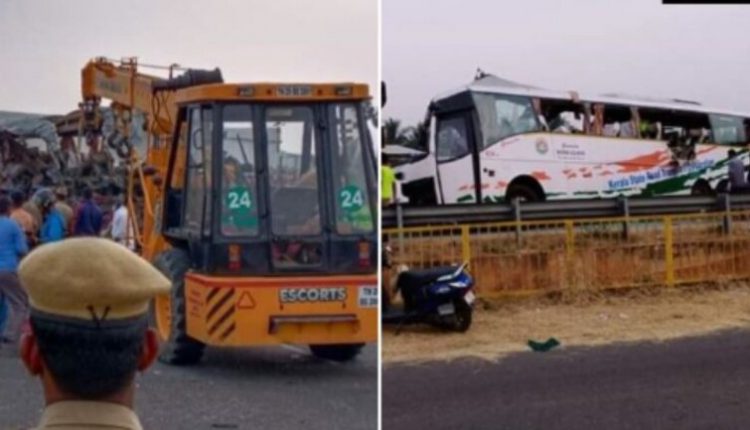 The worst road accident occurred in Tamil Nadu early Thursday morning. A heavy container collides with a Kerala-based RTC bus at Avinashi in Thiruvarur district. The accident killed 20 people and injured 22 others. The accident occurred at Thiruvarur when a bus belonging to the Kerala State Road Transport Corporation was traveling from Bangalore to Ernakulam. The dead were passengers on the bus, including five women. A Volvo bus bound for Bengaluru with 48 passengers on Wednesday night collided with a heavy container at Avinashi in the early hours of Thursday morning.

Not only passengers on the bus seriously injured, 10 people lost their lives at the venue. Five more died in hospital after the Avinashi road accident. Most of the dead were from Thrissur, Palakkad and Ernakulam. The bus driver and conductor also died in the accident, said Kerala Transport Minister Aki Sasheendran. The bus which was coming out of control collided with container. Another 23 people injured in the accident in avinashi road in Coimbatore today. Treatment is going on at Avinashi Hospital. Some people call it as Tirupur road also.

On receiving information about the accident, Tamil Nadu police reached the scene and took action. The victims were taken to Avinashi Hospital for treatment. Rescue operations are going slow as the accident in a remote area. Fire and police personnel arrived at the scene with information provided by the locals and began a rescue operation. The police have registered the case and rushed the bodies to the Tirupur Hospital in Coimbatore.