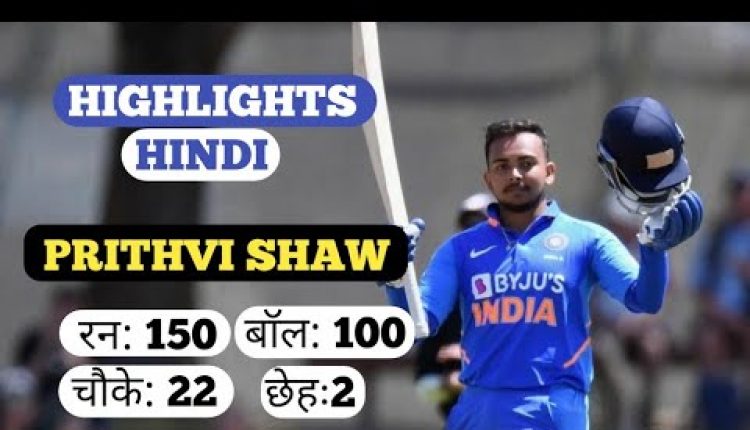 Just before team selection, Prithvi Shaw’s amazing, 22 fours and 2 sixes hit the score. Prithvi Shaw did not even play a practice match for India A on New Zealand tour due to injury.

Prithvi Pankaj Shaw (born November 9, 1999 in India) is an Indian cricketer and former captain of the Indian U19 national cricket team. … He performed internationally for the first time on October 4, 2018 and was the second youngest Indian to complete a test century after Tendulkar and the youngest Indian to do so during the test debut.

Prithvi Shaw knocks 150 in india a vs New Zealand XI.

New Delhi. Team India is currently busy in the domestic ODI series against Australia and after that the team has to take a long tour of New Zealand. Team India will play a series of five T20s, three ODIs and two Test matches against New Zealand. For which the T20 team has already been selected and today the ODI team can be announced on Sunday. It is believed that the announcement of the ODI team was postponed due to the injury of Prithvi Shaw. But now Shaw is fit and is part of the India A team on the New Zealand tour. Where Shaw batted hard just before team selection and proved that the decision to postpone the announcement of the ODI team was right.

Prithvi shaw returns after an injury.

Returning from injury, Shaw scored 150 runs against New Zealand XI with 22 fours and two sixes off 100 balls. On the basis of this innings, India A scored 372 runs while batting first.

Prithvi Shaw made a comeback after suffering an eight-month ban due to first doping and shortly after he became a Ranji Trophy match. Shaw suffered a shoulder injury during the Ranji Trophy match, due to which he was ruled out of two practice matches played against New Zealand A. According to reports, the announcement of Team India’s ODI and Test team for the tour of New Zealand was postponed due to his injury.