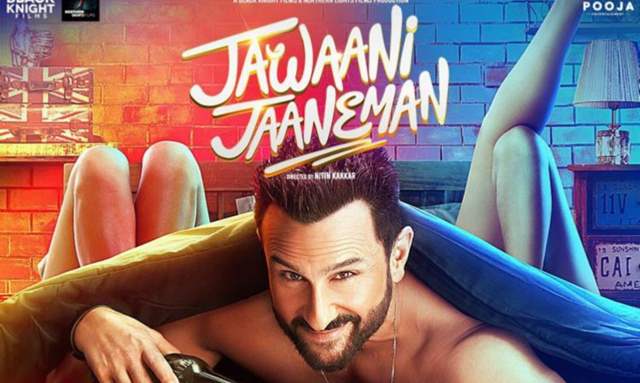 The Jawani Janeman movie is somehow a lesson for all singles who plan to go alone throughout their lives. Be sure not to miss this movie.

Jawani Janeman movie tells the story of Jaz who wants to live a carefree and colorful life surrounded by women; who does not want any woman to stop him and enjoy his life as a womanizer who likes to have a lot of fun. But, according to nature’s final rule, all good things must come to an end! And Jaz conflicts with his ideas of life when he is informed that he is a father. Jawaani Jaaneman online streaming partner is amazon prime Ott now. Read about the release date news here.

The film begins with Saif Ali Khan entering a pub. This entry obviously seems like the right place for a middle-aged man pretending to be young. With all the vibrant light that floods his vision, Saif’s rock entrance is reinforced by Jeene Mera Dil Liya’s background score . This clearly hints at Jaz trying to hit a woman.

While we feel a surprise with a new version of the song (which is literally a disappointment), movie has presented the protagonist already as a womanizer and do not expect him to show any respect for women. But make sure you don’t judge this happy soul, it could be a hard shell from the outside, but inside, it’s just another cat that is ready with a warm hug.

Nitin kakkar has planned the drama between main characters well.

The execution of this film is quite unique since the main characters are exposed instantly and Nitin Kakkar plans to play with the script to film the everyday humor that will definitely bring a parade of applause and keep it rolling in the halls. Jaz is an evolved version of Dil Chahta Hai’s Sameer and if you love watching Saif in the 2001 comedy and drama film; Be sure to watch this movie.

Alaya gets tired of reconciling with his Jaz. He is suspected of being his father, and he tries to move towards her. The sequence never seems to extend much. The writer Hussain Dalal has staged the script with excellence. We have to applaud creation of such a bold script. As the young Alaya reveals her plans to the middle-aged casanova, the film keeps you trapped by her humor and wit, but the plot twist will hit you with a known blow that will make you laugh and feel sad for Jaz.

It is simply beautiful how they have used Saif’s character and the philosophy of his life that makes you think; How did Saif spread its vibrant colors on a blank canvas? In fact, every passing minute of your screen presence is nothing but years of hard work and experience. Every part of their expressions and body language is much more convincing and striking.

Not only drama there is a pinch of humor to keep you engaged.

The writers have managed to successfully transition each character and the update with the humor of the new era has definitely added realism to the Jawani Janeman movie.

The first half focuses on chemistry and slow transition between.

The first half tries to introduce the chemistry between the characters and their slow transition between them. Saif did a fabulous job of recommending Kubbra for the role of Rhea. She plays the character of Jaz’s friend and a serious love interest. Meanwhile, as we move towards the second half of the movie, it presents main pieces of the game. Also Tabu captivates you with its entry.

The director could have revealed Ananya’s character a little earlier. It would have been fun to see Tabu as a hippy mother. As she crashes into her former lovers’ house to help her daughter. The most amazing part is Alaya, the young actress has clung to her character and looks fabulous throughout the movie.

Director Nitin Kakkar left his mark on the film.

In fact, the director has left his mark on the film. The mark is with a beautiful and strong image that surrounds love and profession. As we move towards the climax, the characters begin to crumble. The Saif’s fight with Alaya is with us. While Saif tries to make peace with her daughter, Alaya says: “Maain yaha apne Papa dhundne aai thi but Mila ek top ka broker” and suddenly you see a bus with an ad that says: “Helping business to love!”

Overall, the movie is really cool. It is worth every penny you spend, and be sure to spend. Don’t expect it to be less Bollywood cliché, since it doesn’t matter how good each aspect is. But that’s the best you can get!