DMK leader Stalin – My friend Rajinikanth is an actor, Not a politician. 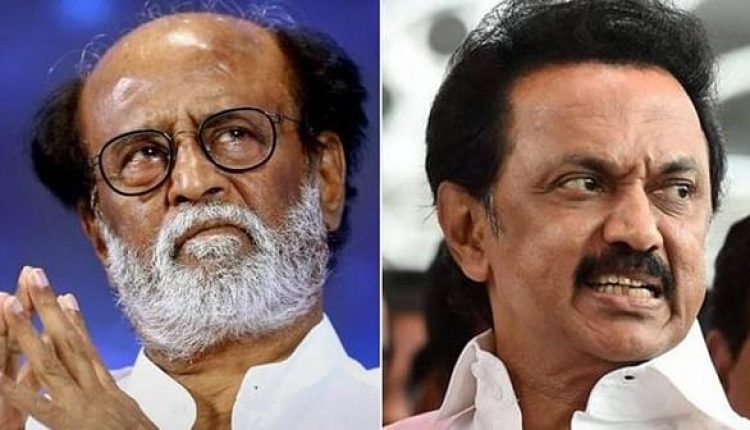 Tamilnadu Opposition Party DMK leader Stalin has advised actor-politician Rajinikanth to think and talk. These suggestions were made when the comments made about Periyar Ramasamy and he was criticized. Rajini said on Tuesday that he did not apologize for any wrongdoing.

He said that the comments I made were not the ones that I had written … and that there were articles in the newspapers on them, if needed. DMK chief Stalin said, “My friend Rajinikanth is not a politician. He was an actor. I urge you to think about Periyar, ” DMK leader Stalin said.

Rajinikanth, who participated in a function on January 14, said in a rally in 1971 that the statues of Periyar Sitaram were defamatory. Dravidar released and Kaligam (DVK) complied with police alleging Rajinikanth making false allegations about Periyar.

Since then Dravidian groups have been protesting against Rajini in Tamil Nadu. Thantai Periyar Dravidar Kazhagam leaders staged a protest march at Rajinikanth’s home on Tuesday.

What happened earlier in this issue.

Superstar Rajinikanth says he will stick to his comments on a procession led by social reformer Periyar Eve Ramaswamy. He made it clear that he was not bothered by this and said sorry. At a media conference held on Tuesday at his house in Poes Garden, Rajani said there was no lie in his comments. Rajani has been shown the media and newspaper clips of Periyar in 1971, in an objectionable manner to the statues of Sitaramudi. He said that it was only published in newspapers and magazines. He said he would not say sorry. “I didn’t say anything in anticipation. Not even mentioning it.

Laxmanan (then Janasang, now BJP leader) who participated in the Periyar procession also conformed it, ”Rajani explained. “It is not an easy task to forget. But it is an issue that must be forgotten, ”said Rajni. Rajinikanth, who was participating in a function organized by Tamil magazine Tughlaq on the 14th of this month, addressed the procession. It is controversial that Rajani claims some allegation about the statues of Sitaramachandra Murthy and Sita Devi were staged in Salem in 1971 under Periyar’s command. Dravidar Viduthalai Kazagam demanded that superstar has to apologize . A case has been filed at the police station to take action against him. DMK chief Stalin advised Rajani to think before talking about Periyar