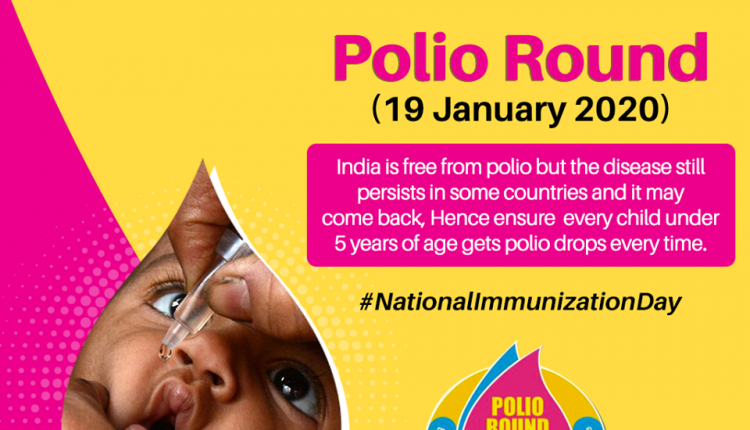 Pulse Polio Day 2020 : date, history, slogans and quotes to spread awareness
Do not compromise your child’s health and take them with you on January 19, 2020 for a polio drop vaccination camp.

Paralysis Day 2020: Many children are now given polio vaccines
On March 27, 2014, India and the entire Southeast Asian region of the WHO were officially declared polio-free. However, there have been reports of polio revival in Pakistan and China.

The polio vaccination program, launched in 1995, treats around 172 million children every day. There has been controversy over the lack of polio vaccinations last year as the National Immunization Day – the day the vaccine is administered – has been postponed. However, the department dismissed the lawsuit and polio shots were carried out in March 2019.

Polio or polio is an infectious disease caused by the poliovirus. In about 0.5 percent of cases, there is muscle weakness that leads to inability to move.

Pulse Polio is an immunization campaign launched by the Indian government to eliminate poliomyelitis in India. Pulse polio was launched with the global polio eradication initiative in 1988 following the World Health Assembly resolution in 1988. The Pulse Polio Immunization Program was started in India in 1995. Therefore, vaccination was carried out every year for all children under 5 years of age to combat polio.

Approximately 17.4 million children under the age of five receive polio drops as part of the Indian government’s efforts to maintain polio eradication. According to the national health report, the program for polio day 2020 will take place on January 19. we are observing this day as Pulse polio day 2020.

Polio is a very contagious disease, also known as poliomyelitis or polio, which is caused by the poliovirus and leads to muscle weakness and movement disorders in people. It spreads easily from person to person. Sometimes it is very dangerous and can lead to permanent disabilities and even death.

So don’t forget to take your child (0-5 years) to a polio booth near your home for oral polio vaccine drops. Here are some polio slogans you can use to raise awareness of polio vaccinations and eradications.

“Do Boond Zindagi ki”
“Save the Children, Give the Vaccine”
“Prevent birth defects.”
“Stop polio, vaccinate.”
“Get a drop, stop the strop.”

“Vaccines for children are one of the great successes of modern medicine. In fact, parents whose children have been vaccinated no longer have to worry about their child’s death or disability from whooping cough, polio, diphtheria, hepatitis, or a variety of other infections . ” – Ezekiel Emanuel

“I went to various elementary schools across the west coast. I was polio at eight and spent eight months in a hospital and rehabilitation clinic in Seattle.” – Dennis Washington

“People have always used our intelligence and creativity to improve our existence. After all, we invented the wheel, discovered the fire, invented the printing press and found a polio vaccine.” – Naveen Jain

“Polio is very special because once you get eradicated, you don’t have to spend money on it. It’s just a gift for the rest of the time.” – Bill Gates

“If you give us a safe vaccine, we’ll use it. It shouldn’t be polio for autism.” – Jenny McCarthy

When did India become a polio-free country?

Vellore (Tamil Nadu) was the first Indian city to become 100% polio-free through the pulse strategy, and the rest of India adopted the strategy in 1995. On March 27, 2014, India and the countries were declared polio-free in the Southeast Asian region of the WHO.