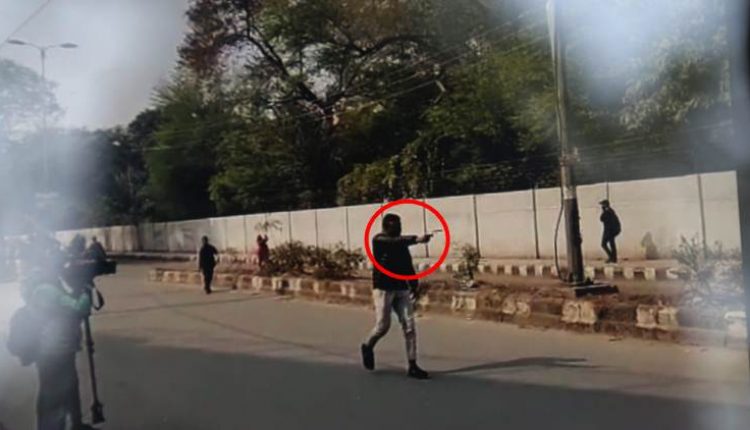 Jamia shooting, CAA Protest Today: In the video, you can hear the man with the gun saying. “Yeh azaadi … Hindustan zindabad … Delhi Police zindabad.” A student at Jamia University was injured. Delhi police have arrested the man.

The armed man opened fire and injured a student of Jamia Millia Islamia. This happened in a protest against the Citizenship Law (Amendment) (CAA) in the city’s Jamia area on Thursday. The 25-year-old, the shot was on the hand of the injured. Police have rushed him to the Holy Family hospital nearby.

In a video, the man can be heard brandishing the weapon saying: “Yeh azaadi … Hindustan zindabad … Delhi Police zindabad.” Delhi police personnel were present at the scene when the shooting occurred. Police have identified him as Gopal, and arrested him.

Authorities have identified the injured student as Shadab Najar. Coming from Jammu and Kashmir, the 25-year-old is studying mass communication from the university team. Jamia students were to march towards Rajghat on the 72nd anniversary of the death of Mahatma Gandhi.

The shooting comes days after the Union minister, Anurag Thakur, at a BJP rally encouraged those present in the crowd to sing ‘Goli maro saalon ko’. goli maaro saalon ko. “It roughly translates as” What should be done with the traitors of the country? Triggers. “The Electoral Commission has imposed an additional 72-hour ban on

The secretary general of IPC D Raja reacted about it.

The secretary general of the IPC, D Raja reacted on the incident. He called it a “direct result” of the incremental comments made by BJP leaders while campaigning for the Delhi Assembly polls. Raja told PTI that it was unfortunate that such an incident had occurred on the anniversary of Mahatma Gandhi’s death. “The Jamia shooting incident is the direct result of provocative statements made by BJP leaders during the campaign in Delhi. BJP leader Anurag Thakur should be arrested for his comments urging the crowds to raise the motto of shooting at traitors, “Raja said.