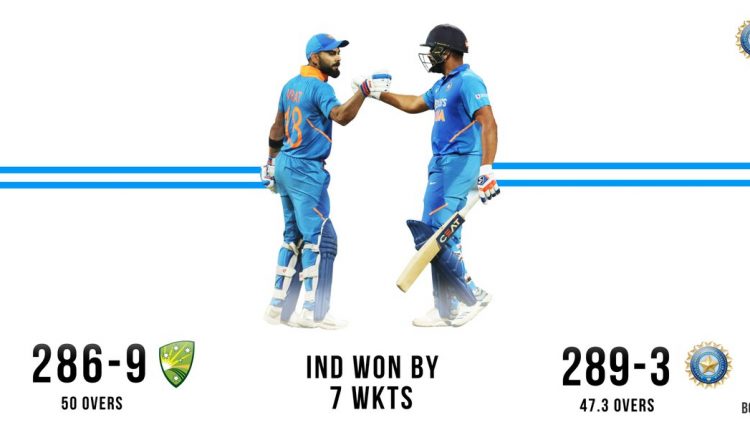 India vs. Australia 3rd ODI highlights: Rohit Sharma scored his eighth ODI century against Australia. This is the record of Virat Kohli, who helped India win the match with.

India vs Australia 3rd ODI highlights: India defeated Australia by seven wickets with 15 balls to win the three ODI series. After a target of 287, India got off to a good start when Rohit Sharma and KL Rahul shared a stand with 69 runs. In Shikhar Dhawan’s injury-related absence, Rahul opened the innings. Ashton Agar took his wicket. Rohit Sharma and Virat Kohli took over the chase to keep the chase on track. Rohit posted his 29th ODI century eighth against Australia, while Virat Kohli posted his 100th cricket result over 50. Rohit had to get out because he had lost his wicket against Adam Zampa. Kohli missed his century when he lost his wicket to Josh Hazlewood on the 89 score. Shreyas Iyer made sure India got home safely when he struck an undefeated 35-ball 44 alongside Manish Pandey, who ended the chase with two boundaries.

Earlier, Australian skipper Aaron Finch won the litter and decided to hit first. Mohammed Shami made the early breakthrough when he overtook David Warner’s Wicket in the third over. Finch was the victim of a terrible confusion with Steve Smith when he left for 19. Steve Smith and Marnus Labuschagne added 127 runs for the third wicket. Labushagne left shortly after reaching virgin fifty. Smith went on to count his 9th ODI century, his first after two years. The trick to send Mitchell Starc in 5th place failed when he went duck hunting. Ravindra Jadeja got the wicket from Starc and Labuschagne. Alex Carey looked menacing, but Kuldeep Yadav got his wicket at the last moment of his spell. Ashton Turner failed when he lost his wicket to Navdeep Saini. Shami ended up with four wickets for 63 runs. He got the wickets of Smith, Pat Cummins and Adam Zampa in the agony.