Mahashivaratri 2020 : When is it. Date & Auspicious time. why do we celebrate ? Fasting story to reach salvation 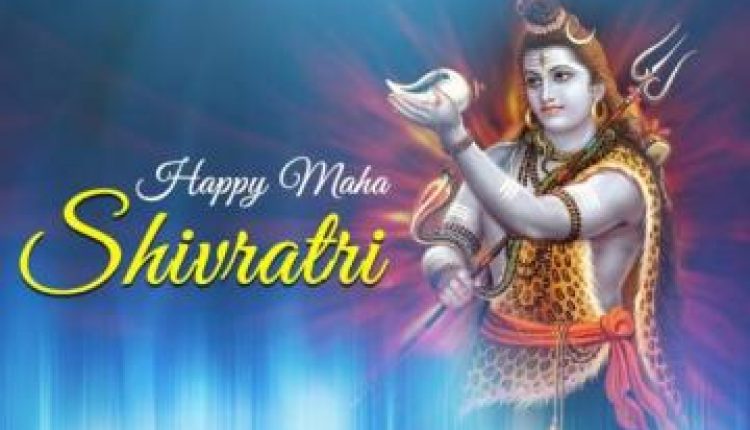 Shivratri 2020: On the day of Mahashivaratri 2020 , one should recite the Shiva Purana and recite the Mahamrityunjaya Mantra or Shiva’s almighty chant “Om Namah Shivaya”.

Is Mahashivratri a national holiday?

Mahashivratri is a big festival. It is related to hindu god Lord Shiva. Yes its national public holiday in most of the states in India. Lot of private sector companies also declare it as holiday. How ever, in some few states it is a optional holiday.

new Delhi: Mahashivratri is one of the major festivals of the Hindu religion. Shiva devotees look forward to this day for the special worship of their adorable Bhole Bhandari throughout the year. On this day, devotees try to please Shiva Shankar by offering water, milk and bell leaf on Shivalinga. It is believed that on the day of Mahashivaratri, the devotees who offer the anointing or watering of Shivalinga with true heart get special blessings of Mahadev. It is said that Shiva is so naive that even if someone worships Shivling involuntarily, he gets Shiva grace. This is the reason that Lord Shiva Shankar has been called Bholenath. Let us tell you that Shivaratri which falls on the Chaturdashi of Krishna Paksha every month is called Shivaratri only. But Shivratri, which falls on the Krishna Chaturdashi of Falgun month, is called Mahashivratri.

According to the Hindu Panchang, Shivaratri which falls on the Krishna Paksha Chaturthi of Falgun month is called Mahashivratri. According to the Gregorian calendar, it falls in the month of February or March every year. This time Shivaratri is on 21 February.

Why do we celebrate Shivaratri ?

There are three beliefs about celebrating Shivaratri:

On morning of Mahashivaratri, wake up early in the morning and take a clean clothes and take a pledge.

The mantra of worship should Recition on the day of Mahashivaratri, recitation of the Shiva Purana and the Mahamrityunjaya Mantra or Shiva’s almighty chant “Om Namah Shivaya” .

According to mythological beliefs there was a hunter. His name was Chitrabhanu in ancient times. He raised his family by killing animals. He was a money lender, but could not repay his loan on time. Angry moneylender captives the hunter in Shivmath. Incidentally, it was Shivratri that day. The hunter kept meditating and listening to religious things related to Shiva. He also heard the story of Shivaratri fast on Chaturdashi. Soon after evening, the moneylender called him to him and talked about repaying the loan. The hunter broke the bond the next day, promising to repay the entire loan. Like his daily routine, he went out hunting in the forest, but was distraught with hunger and thirst due to being in detention house all day. He went far away in search of prey. When it got dark, he thought that the night would have to be spent in the forest itself. He climbed a vine tree by the side of a pond and waited for the night to pass.

The Shivling under the bilva tree.

There was a Shivling under the Bilva tree which was covered with Bilvapatras. Hunter could not find the person. The twigs that he broke while making the halt coincidentally fell on the Shivling. In this way, fasting and thirsty hunters fasted throughout the day. Morever, bilvapatras also mounted on the Shivling. At one o’clock in the night, a pregnant woman came to drink water at the deer pond.

As the hunter drew an arrow on the bow, Hirani said, “I am pregnant. I will deliver soon. You will kill two creatures together, which is not right. I will give birth to the child and will be presented to you soon.” , Then kill. ” The hunter loosened the cross and the deer disappeared into the wild bushes. At the time of offering and loosening, some bilva papers spontaneously broke and fell on the Shivling. In this way, the worship of the first Prahar was also done inadvertently.

Shortly after, another Hirani emerged from there. The hunter was over the moon. After coming close, he put the bow on the arrow. Then Hirani humbly pleaded, “O hunter! I have retired from the season a while back. I am a lustful Virahini. Myself wandering in search of my beloved. Will meet my husband and come to you soon.” The hunter let him go as well. He was perturbed over losing his prey twice. He was in all sort of thoughts. The last hour of the night passed. This time too, some bell-papers fell on the Shivling with a bow and the worship of the other Prahar also completed.

Then another Hirani came out from there with her children. It was a golden opportunity for hunters. He did not take long to shoot arrows at the bow. He was about to drop the arrow that Hirani said, “O hunter!” I will return these children to their father. Do not kill me this time. ” The hunter laughed and said, “I am not such a fool as to leave the prey exposed. I have lost my prey twice before. My children must have been hungry and thirsty. In reply, Hirani again said,” As you The love of our children is haunting me, just like me too. Hey hunter! Trust me, I promise to leave him to his father and return immediately. “

Hearing the humble voice of Hirani, the hunter felt pity on him. He let that chicken escape too. In the absence of hunting and distraught with hunger and thirst, the hunter was inadvertently throwing the bell-sheet sitting on the vine-tree, breaking it down. When the dawn broke, a strong deer came on the same path. The hunter thought that he would definitely hunt it. Seeing the trunk of the hunter, the antelope said in a polite voice, “O hunter! If you have killed three antelopes and small children coming before me, then do not delay in killing me too, so that I have a moment in their disconnection. Do not have to suffer. I am the husband of those deer. If you have given them life, please give me a few moments of life. I will meet them and appear before you. “

As soon as he heard the deer, the whole night cycle happened in front of the hunter, he narrated the whole story to the deer. Then the deer said, “The way my three wives have gone as promised, I will not be able to follow my religion with my death. So, just as you have left them as confidant, so let me also go. I will join them all in front of you soon.” Only present. “

The hunter let him go as well. Thus morning came. Fasting, night-awakening and climbing of bell-sheet on Shivling inadvertently completed the worship of Shivaratri. But inadvertently, he got the result of the worship done immediately. The violent heart of the hunter became pure. Bhagavad Shakti dwells in it.

How did the hunter reach salvation unknowingly with shiv puja and fasting ?

Shortly afterwards, the antelope appeared before the family hunter, so that he could hunt them. But seeing the veracity, sattvikta and collective love of wild animals, the hunter was very sorry. He gave life to the antelope family.

Unknowingly following the fast of Shivaratri, the hunter got salvation. When the Yamdoots came to take his creature in death, the Shivguns sent him back and took the hunter to Shivlok. It was only by the grace of Shiva that King Chitrabhanu was able to remember his previous life in this birth and after knowing the importance of Mahashivaratri, he could follow it in his next life as well.