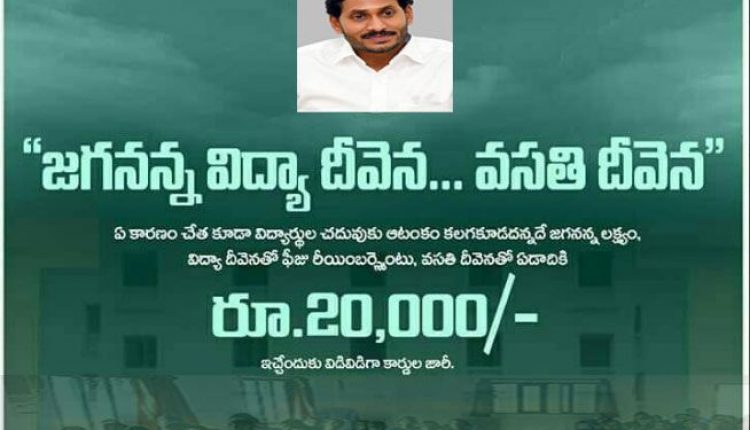 Jagan tour in vijayanagaram : Jagan Sarkar is already embarking on many welfare schemes in the state. CM Jagan will be touring Vijayanagaram today. In this backdrop, officials and YCP leaders have made extensive arrangements to welcome CM Jagan. This should be Jagan’s first visit to the Vijayanagaram district after coming to power. So local leaders are trying to accumulate massive popularization to this event in the district.

One of the 9 Navaratnas is ” జగనన్న వసతి దీవెన ” program. Now Ap govt has made all arrangements to launch it in Vijayanagaram district today. As part of the program, 11,87,904 people across the state will receive Rs 20,000 each year from Govt. In Vijayanagaram district alone 58,723 people will be get benefit of 20 thousand rupees. Earlier, Jagan had announced that students and higher education students would gain this amount every year.

After the event, CM sir will open the Disha Women’s Police Station, which has been set up for the protection and security of women. Ministers Bothsa Satyanarayana and Pamula Pushpashrivani are overseeing the arrangements in the wake of the CM Tour. The authorities have orders to make arrangements without any deficiencies.

CM Jagan will take a special flight from Vijayawada to Visakha. From there, he will reach Vijayanagar at 11.30 am on the helipad. Afterwards, There is launch of the program of “Jagananna accommodation” at Ayodhya Ground. Opening of Disha Women’s Police Station set up in Police Grounds will happen after that.