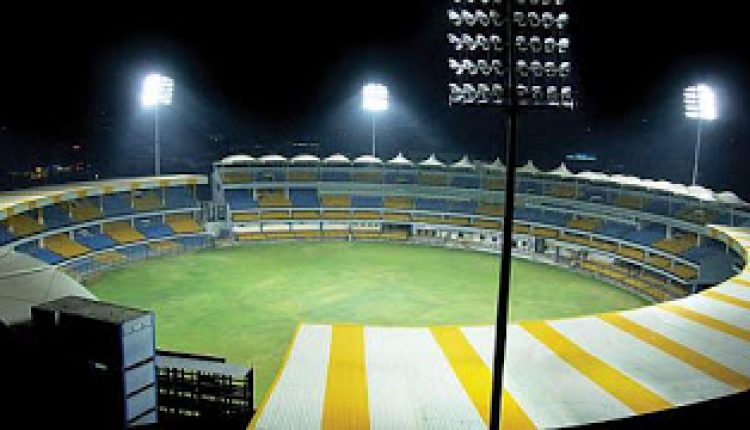 The second T20 match between Ind vs Sl t20 2020 will be played at Holkar Stadium on 7 January
A separate stand is being prepared for the players to sit near the boundary in the ground.
There was a meeting between the Collector and MPCA on the preparation of the match, the meeting was arranged

The second match of the India vs Srilanka T20 series will be played at Holkar Stadium, Indore on 7 January. In view of the match, a meeting was held between Collector Lakesh Kumar Jatav and MPCA on Saturday, in which the issues about the match were discussed, in which people meeting arrangements, parking arrangements, traffic and safety were discussed. At the same time, regarding the complementary and VVIP passes, there is no pressure on the MPCA. Accordingly, the MPCA was explicitly asked to distribute complementary passes. The special thing is that this time the match will be on center wicket and black clay pitch. Therefore, there are more chances of hitting fours and sixes.

On 7 January, the match will start from 7 pm. Winning Toss will be crucial in this match, because there will be dew on the ground due to the cold winter. This will affect bowling and fielding. However, special chemical will be put on the field to deal with the attack, so that dew drops will not stay on the grass for long. Apart from this, a team of about 50 groundsmen has been prepared, which will dry the field with the burrows and super sapper machine during the match. The toss will play a key role in this match and the chasing is likely to benefit later. Because dew will be more on the field during the second innings. This will make the ball wet and the bowlers will have trouble getting the grip. Apart from this, the ball will stop at the wicket, on which the batsmen will be able to play the shot easily. According to the Meteorological Department, the next three days will be sunny. No dew is expected in the evening. However, even if the dew is low, the team bowling in the second innings will face problems.

Both teams will come on 6th.

As a part of the Ind vs Sl t20 2020 schedule teams will play the first match of the three match series in Guwahati on 5 January. The indian cricket team & Sri Lanka team will come to Indore on January 6 and will stay in Radisson. Some players can go to the stadium to practice in the evening or watch the pitch. Made practice pitch at Gal End.

All sold in gallery and pavilion sales
All the gallery and pavilion tickets for the ind vs sl t20 match have been sold. These include general category, student waiver and women block tickets. Gallery tickets have been sold in the Divyang class, while there are some pavilion tickets left. Around 18 thousand tickets are available for the audience. Other Complimentary Passes are to be given. These Complimentary passes also include BCCI, Umpires, Players, Advertisement, Administration, MPCA and IDCA members quota. Around 1100 passes have to be sent by the MPCA to all 30 BCCI affiliated associations. Whether the board and other association officials come to see the match or not, they still go to this quota. Apart from this, around 4000 Complimentary passes have to be given by MPCA to the Governance-Administration.

Helpful for batsmen, bowlers were helped in Tests
Pitch curator Samander Singh Chauhan told that this time the match will be on center wicket and base soil (black soil). In November last year, the India-Bangladesh Test match was played on the red soil. This wicket proved to be helpful for the bowlers. However, in T20 viewers come to see fours and sixes. Hence the pitch has changed.

65 on either side, 70 yards in front
In the T20 format, spectators expect the bat to bat. Because of this the boundary in this format is smaller. The boundary on both sides is 65 yards i.e. 59.43 meters away. The length of the boundary at the front is 70 yards or 64 meters.

R had the fastest century
This will be the second T20 match at Holkar Stadium. Earlier in December 2017, T20 was played between India and Sri Lanka. Then India won. Rohit Sharma scored the fastest century of the T20 tournament by scoring 118 off 43 balls in the match played against Sri Lanka at Holkar Stadium itself. India had then scored 260 for five, the second highest score in the T20 tournament.

Last time there were 1.75 lakhs left
BCCI gives Rs 2 crore to MPCA for the match. The MPCA had gained Rs 1.75 lakh from the last T20 match in Indore. The funds from the BCCI are utilized for the maintenance of the stadium, police-administration duties, private security, camera system and maintenance of chairs. In addition, 50 groundsmen are working. Every day about 1000 rupees are being given.

Will Sanju samson will be given an opportunity in playing 11 in at least one T20 match or Rishab pant be continued despite his continuing lack of form. Jasprit bumrah & Shikar dhawan are returning to the team after a long injury gap. KL Rahul has played well as opener with Rohit sharma in the absence of Shikar dhawan. So Shikar has to play good knocks to justify his place in the team ahead of in form KL Rahul. Manish pandey has been in and out of indian cricket team in t20. He is not getting enough chances to show his brilliance. Hope he gets a good opportunity and he utilizes it. All eyes on Manish Pandey.