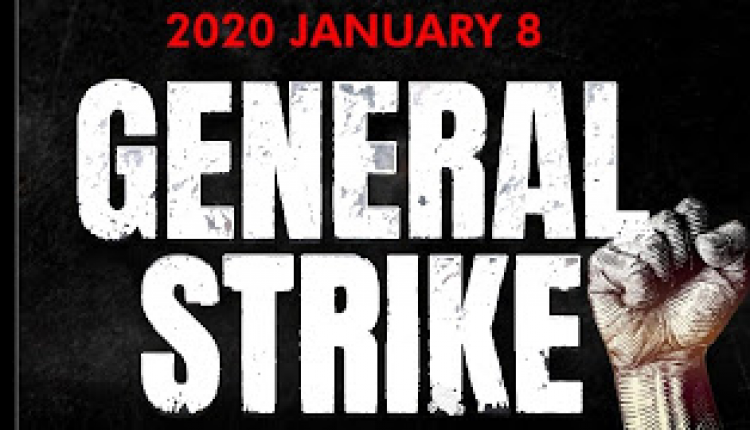 10 central unions announced on Monday that around 25 million people would take part in a nationwide strike on January 8 to protest the government’s “anti-people” policy. The trade unions INTUC, AITUC, HMS, CITU, AIUTUC, TUCC, SEWA, AICCTU, LPF and UTUC as well as various sector-independent associations and unions had adopted a declaration in September that led to a nationwide strike on January 8, 2020. “We expect no fewer than 25 million workers to take part in the upcoming national general strike on January 8, 2020, followed by many other measures to reverse the EU’s anti-worker, anti-human and anti-national policies Government. “The Department of Labor has failed to meet workers’ demands to meet on January 2, 2020. The government’s stance is that of contempt for work, as we deduce it from its policies and actions,” said the Central Secretary of Trade Unions (CTUs) said in a joint statement. Around 60 student organizations and elected officials from some universities have also decided to join the strike to speak out against a higher fee structure and the commercialization of education. The unions condemned JNU violence and similar incidents at other universities and expressed solidarity with students and teachers across India.The unions also expressed displeasure at the fact that no Indian labor conference had been held since July 2015 on the codification of labor laws and the privatization of PSUs. “Up to 12 airports are already privately held, a 100% sale of Air India has already been decided, the decision to sell BPCL has been made, the merger of BSNL and MTNL has been announced and 93,600 telecommunications employees are already under the guise of VRS become unemployed (voluntary old-age pension) “, he added. The unions are also opposed to the privatization of the railways, the corporatization of 49 units of defense production and the forced merger of banks. The common platform of more than 175 peasant and farm labor unions will expand their support for workers’ demands and watch January 8th as Gramin Bharat Bandh along with their demands charter, they added.